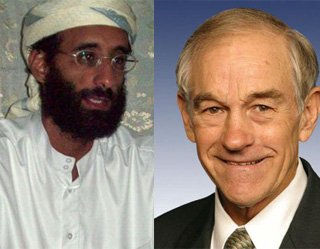 Just when I was starting to gain some respect for Ron Paul he comes out to defend the rights of US born Anwar al-Awlaki, a traitor who has openly sided with the enemies of the USA and thus declared war on the USA (see this video for openly calling for killing of American civilians and soldiers: CBS News; Al-Awlaki: “Kill Americans”)

I have always had a problem with Ron Paul’s inability to denounce the despicable and immoral “truther” movement within his groupies (see: “Debunking the 9/11 Myths: Special Report), but this latest episode seals the deal for me that if this man somehow becomes the Republican nominee for president.
If nominated, I will either vote third party or hold my nose for Barrack Obama, who thankfully actually did the “right thing” in vetting and signing off on taking out this terrorist. Do not get me wrong, I find Obama’s socialist over-reaching government and plain dishonesty despicable, but then I find Ron Paul’s “look the other way, its not my problem” libertarian view equally troubling and both views have had catastrophic affects on my family on a personal level.

Back to the so-called rights of Anwar al-Awlaki since he is a US born citizen (I say he gave up his citizenship), I would refer to:
Article Three of the United States Constitution; Section 3, Treason.
While I am certainly no constitutional scholar (I will leave this to Mark Levin), my reading seems to indicate that Anwar al-Awlaki essentially denounced his citizenship.
One analogy I would put forth to Ron Paul and others that see this as a first step in a slippery slope of the US government denying certain constitutional rights such as a fair trial is this:
During the Civil War, should we have Mirandized every Confederate Soldier prior to firing on them? (BTW, I know the term to give Miranda Rights occurred well after the Civil War, about 1967 if my memory serves me).
This analogy is far from perfect, for one I think Anwar al-Awlaki is bluntly an evil bastard nearly on par with the likes of Hitler and Pol-Pot, while Confederate Soldiers were anything but evil, even if I might disagree with their cause (even then it is slavery I disagree with, not States Rights, but the right to be free and not owned by anyone transcends ANY States rights).

Anyway, this is my 2 cents as to two issues as to why I think Ron Paul is the least qualified person running for president of the USA, even though he certainly has it right that we need to stop spending immediately.

Here are a few unrelated, but interesting articles by a friend in my main line of works; Aquarium/Pond Keeping:
*UV Bulb; an excellent UV-C Bulb Replacement Guide along with articles

*Aquarium LED Lights, Lighting; a top notch article about choosing the best in LED light fixtures for your aquarium

This entry was posted on Saturday, October 1st, 2011 at 10:25 pm and is filed under Business, Opinions, Uncategorized. You can follow any responses to this entry through the RSS 2.0 feed. You can leave a response, or trackback from your own site.